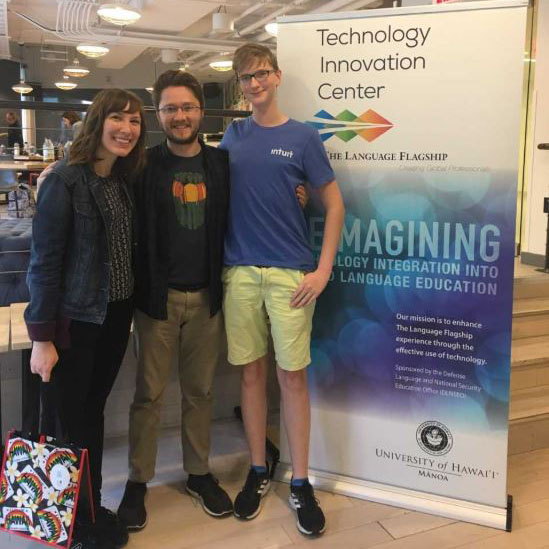 In order to connect, network, and learn with other Language Flagship students throughout the United States, the Russian Flagship Program at the University of Wisconsin-Madison sent four attendees to the Flagship Hackathon in Washington DC on October 19 and 20.

The Flagship Hackathon is a fast-paced learning event that allows participants to “use your experience and seek advice from experts in the field of language technology to propose technology-based solutions (‘hacks’) that may impact the future of language learning.”

The purpose of the event is for students or employees in the language fields of study and work to get together and develop ways and systems to improve the technology of language learning.

Students were then selected to attend the event based on the quality of their ideas. The Language Flagship sent out a national call for proposals, making attendance competitive, but the Hackathon itself centered around brainstorming and working together as a large group.

Additionally, all attendees that were selected automatically become members of the Language Flagship Technology Innovation Center Student Advisory Board. Board members “provide input and guidance on technology projects and initiatives that may have a direct impact on the Flagship community and Flagship students’ language learning endeavors.”

Students from the seven different Language Flagship programs across the United States were in attendance, with UW-Madison sending four total attendees from their Russian Flagship Program.

Janet Stewart, a current graduate student in Teaching English to Speakers of Other Languages (TESOL) at the University of Minnesota-Twin Cities, graduated from the Russian Flagship Program at UW-Madison in 2015. Since graduation and during her studies at Minnesota, she has worked as a Student English Language Support Consultant at the Minnesota English Language Program (MELP) and as a graduate research assistant at the National Center on Educational Outcomes (NCEO).

Janet’s proposal addressed the challenge of technology flow. She wanted the valuable time students and instructors put into finding resources to be able to be shared, saved, and organized in a way that was right for each person.

“Essentially, I wanted to create a platform where students could curate their own resources in a way that is more intuitive and sophisticated than a simple database or learning management system,” Stewart said.

While unsure what would happen at the event initially, Stewart said the weekend was a “whirlwind” of learning and engagement.

“When we got to the event, they had organized us into groups based on common themes in our proposals,” Stewart explained. “It was so interesting to hear ideas from my teammates and it worked out that we all had a very similar idea in mind: a better system for resource management.”

In fact, Stewart’s group won the award for Best Technology Hack of the five groups at the Hackathon. Stewart said that with the help of her teammates, team adviser, and expert consultants they were able to create something that everyone was excited about the prospect of having and using.

When asked how she would apply the things she learned at the event in her daily life, Stewart had a lot to say, praising the connections made at the event.

“As a language teacher, I left the event feeling very motivated and reinvigorated to apply what I learned to my work. I’m taking a second look at the learning technologies I already use and wondering about how I can maximize their potential for my students,” Stewart said. “John Lyell [other alumni attendee] and I discussed combining our brain power – his background in computer sciences plus mine in second language acquisition and pedagogy – to do some research together.”

Language Flagships are intensive study programs that help students of any major reach a professional level of competence in a certain language by graduation. While there are seven programs nationally: Arabic, Chinese, Korean, Persian, Portuguese, Russian, and Turkish, UW-Madison offers programs in Korean and Russian.

“After going through the program, you realize how one of a kind the experience is, so being able to connect with people who shared this and understood exactly what it was like was really meaningful to me,” Stewart said.

The Flagship Hackathon is just one event that is offered to Language Flagship students to help them learn and grow. The Language Flagship focuses on helping students develop skills and traits that will make them competitive candidates and leaders in their future careers.

Stewart praised the community the event created saying, “I’m quite excited about accessing the resources and Flagship network I gained at the Hackathon to keep the momentum of the event going. It’s exciting to belong to a community that is so committed to improving language learning for students.”

To learn more or apply to the Russian or Korean Flagship programs at UW-Madison visit their website here.