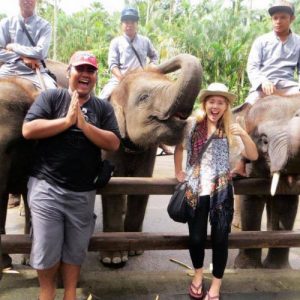 "There exists a myth that English has become the global means of communication and therefore it is not necessary to learn other languages. That assumption blatantly ignores the ninety percent of the world not versed in this supposedly global tongue."

Major(s) and Certificate(s): International Studies, Languages and Cultures of Asia

I started studying Spanish in kindergarten and continued all the way through high school. After graduating from high school I deferred my enrollment to Madison and lived as an exchange student in Indonesia for one year. I learned Indonesian there by immersion. When I started at UW-Madison last semester, it felt natural to study both Spanish and Indonesian.

After returning from my year abroad and starting at UW I wanted to continue studying Indonesian, especially the formal language to which I had limited exposure during my time in the country. Luckily Madison is one of a handful of universities in the country that offers an Indonesian program so I was able to continue my studies.

I love Spanish and genuinely enjoy studying it. Also, you don’t have to travel far to find opportunities to speak Spanish which, in my eyes, is one of the most rewarding parts about learning any language.

Learning languages has enriched my life in many ways, but I would say that the main benefit I have gained transcends anything academic or professional. My knowledge of Indonesian and Spanish has enabled me to communicate with people with whom I would otherwise not be able to communicate. There exists a myth that English has become the global means of communication and therefore it is not necessary to learn other languages. That assumption blatantly ignores the ninety percent of the world not versed in this supposedly global tongue. The feeling of being able to have a conversation with a person in their own language, even with broken, grammatically-incorrect sentences, is unmatched. Nelson Mandela said it perfectly: ʺIf you talk to a man in a language he understands, that goes to his head. If you talk to him in his language, that goes to his heart.ʺ This philosophy is what motivates me to continue studying languages.

My language classes are a refreshing contrast from the large lecture-hall format. I enjoy the sense of community shared in language courses and the accessibility of the instructor. You are in a vulnerable state when learning languages; you must be willing to make mistakes and embarrass yourself. It’s important to feel comfortable in your environment, and the intimate class-setting really helps with that.

I studied in Indonesia for one year as an exchange student sponsored by Rotary International. I chose to go to Indonesia because, honestly, I knew very little about the country and was curious. Considering it is the fourth most populous country in the world I found it strange that we seldom hear about it here in the States. I longed to know more about this mysterious country that seemed to have a growing importance in today’s world.

What I found was more interesting and complex than I could have ever imagined. Being an archipelago of 17,508 islands characterized by over 300 distinct ethnic groups, 700 living languages, and several religions, Indonesia is an incredibly diverse country brimming with unique culture and traditions. Living in an environment that was so drastically different from my norm forced me to reconsider my own values and worldview. By large, I would describe the experience as both the most difficult and rewarding endeavor I have ever taken. I saw beautiful places, met wonderful people, and even learned an entirely new language (along with tidbits of several others). It was an amazing year and I would highly recommend going abroad to anybody who is considering it.