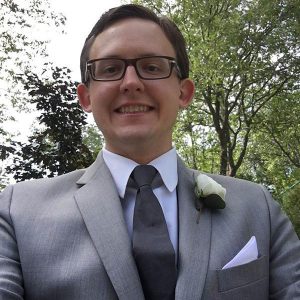 "If you are studying a language now, take the time to learn the foundation of the language. This generally involves learning the pronunciation and basic grammar. Taking extra steps will ensure that you can learn the language efficiently and fluently, and most importantly will be understood by native speakers of the language. "

Upon graduating from Madison in May 2011, I began working for an American company with operations in China. I trained in the USA for three months in manufacturing and operations and was relocated to Shanghai, China to support the company’s China operations in manufacturing, quality, and safety. I was the only American permanently stationed at our company in China and as a result, I spoke, listened to, read, and wrote Chinese everyday in a business setting. For the first year, I worked with the operators on the shop floor and explained best practices and concepts to increase productivity, capacity, quality, and most importantly, safety. After working for the company for one year, I was promoted to the position of Vice General Manager. Shortly after this promotion, the General Manager resigned, and I took responsibility for the accounting, sales, human resources, and managed the operations of the company, including purchasing, production, quality, service, warehouse, engineering, scheduling, and service. After four years and three months of living and working in Shanghai, China, I returned to the Head Quarters of the company for management training. At this time, I am still in the training program and learning something new every day.

I began studying Chinese at the suggestion of my father who saw, back in 2006, that China would become an even larger worldwide economic player in the future. He suggested that knowing Chinese would be an advantage to working with and in that economic landscape. His suggestion and my perseverance to learn Chinese has proven to be a positive influence on my life.

Chinese has allowed me to travel through China and experience the country and culture first-hand without needing a translator. It has allowed me to work more closely with my colleagues in China by being able to communicate with them without any intermediary. The ability to directly connect with others in a different language allows for a pure transfer of ideas from one person to another without the filter or interference added by a translator. Chinese has also allowed me to learn a different method of thought, first hand, and understand a different culture and its nuances first hand. Overall, knowing a second language fluently has made my life more exciting and more interesting.

My language classes at UW were an enjoyable experience. The enjoyable interaction of the small discussion classes between the students and teachers made learning Chinese a fun and engaging experience. The Chinese classes were different from other classes I took on campus because even though they had a schedule and syllabus, the discussions and lecture format allowed for some creativity. The discussions were also a time to get to know other students and think creatively about how to use the language in addition to learning the grammar and vocabulary.

I attended the Tianjin Study Abroad program. This program was a great way to get my feet wet in China. Prior to the program, I had no experience in China and was not sure what to expect. The program allowed me to take 12 credits of Chinese Language over 12 weeks, provided me with a controlled experience in China and gave me a basic understanding of the country. The program also gave me the freedom to go out on my own to see the country during the 10-day self-guided research trip. The summer after this trip, I returned to China and traveled around with one friend for 11 weeks on our own. I would have never dared to go on this trip without first experiencing China through the Tianjin Summer Program. I also participated in and held officer positions in the Chinese Language Culture Club on campus. During my senior year, I was Vice President of the club and during my super senior year, I was the President of the club. The club offered me an opportunity to speak Chinese at Chinese Language table, and also provided me the opportunity to act as an officer and work with a team of amazing students to help others better understand Chinese Culture and to bring Chinese and Non-Chinese students together to interact and build relationships. After graduating, I stayed involved in the club as an informal mentor. In 2014, fellow alumni and I started an endowment called the Chinese Language Learner’s Bridge Fund to support students studying Chinese, CLACC, and the Chinese Department. At this point, the endowment has 6 thousand dollars and it is our goal to reach 10 thousand dollars by the end of 2017 so that the fund is fully endowed. I am looking forward to continuing interacting with the club and the university for many years to come.

After moving to China in 2011 and using Chinese as my primary language every day for work, my reading, listening, and writing skills greatly improved. Living in China also helped me improve my speaking skills because I was required to speak Chinese in everyday life to accomplish daily tasks. Living overseas in China is one of the best ways to imprint the language into your mind so that it stays with you for life.

If you are studying a language now, take the time to learn the foundation of the language. This generally involves learning pronunciation and basic grammar. I saw a lot of students study the language but never take the time to go to office hours or make friends who spoke that language natively. Taking these extra steps will ensure that you can learn the language efficiently and fluently, and most importantly will be understood by native speakers of the language. As you are approaching graduation, know what you want and go get it. I wanted to be in China working as an engineer within 3 months after graduation. I interviewed with 21 companies. Each of the first 20 companies told me that I would have to work for them for 2-5 years before they would consider sending me to China. The 21st company decided to give me the opportunity to work for them in China as an engineer. If you really want to be in whatever country whose language you are learning, persevere and keep looking for opportunities.