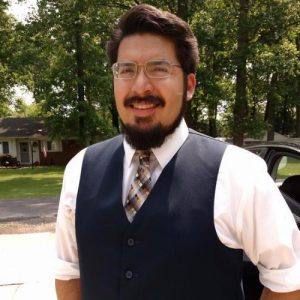 "Russian, Uzbek, and Kazakh have allowed me to gain access and experiences cultures, peoples, and traditions that are very different from my own. Furthermore, I have found that being able to travel to and live in a foreign country without having to rely on English is a very proud and empowering experience."

I am a doctoral candidate in the history department at Ohio State University. My dissertation is on Soviet propaganda in Central Asia during the Stalinist period (1929-1953). For my research, I need to use sources that are in Russian, Uzbek, and Kazakh, as such I need to know how to speak, read, and write in these languages. I was initially drawn towards Russian language and culture as an undergraduate student at Miami University due to a commonly perceived dichotomy between Russia and the United States. During the Cold War, the Soviet Union was seen by many in the United States as this strange communist “other.” This perception is still common in the way that many people in America think about Russia and other successor states of the former Soviet Union. In graduate school, I became interested in the non-Russian and non-Slavic regions of the Soviet Union, especially Central Asia. What drew me towards Central Asia was its rich combination of cultures and languages. Central Asia is a mix of Russian, Slavic, Turkic, Islamic, Persian languages and cultures. This fascinating mix lead me to study Uzbek at Indiana University and Ohio States, as well as study Kazakh at Kimep University in Almaty, and the University of Wisconsin-Madison.

Russian, Uzbek, and Kazakh have allowed me to gain access and experiences cultures, peoples, and traditions that are very different from my own. Furthermore, I have found that being able to travel to and live in a foreign country without having to rely on English is a very proud and empowering experience. Of course, these languages have also allowed me to do research for my dissertation, helping move towards my goal of pursuing a career in academia or government service.

I studied Kazakh at UW-Madison during summer 2016. The most striking and helpful component of the course was being able to work nearly one on one with the instructors. Only one other student besides myself was enrolled in the course and as a result, I essentially received private Kazakh lessons from experienced, knowledgeable, and kind teachers. I believe that this close attention is key to learning a language, especially at the first few levels when the student is working to establish a strong vocabulary and grammatical base of knowledge.

Having lived and traveled in Russia and Kazakhstan has shown me that while language classes can at times be frustrating and difficult, they pay off when one is able to successfully navigate a foreign country and communicate with people in a language other than English.

My first piece of advice is to work very hard at establishing a strong vocabulary and grammatical base of knowledge. While this work can be very frustrating and time-consuming, these steps are essential if one desires to read, speak, and write in a foreign language. My second piece of advice is to study a language for as long as possible. If you are able to study a particular language for your entire undergraduate experience I would highly recommend it. While you might not be able to communicate as well as a native speaker of this language, advanced knowledge of a second, third, or even fourth language can open the door to various career paths.

In Russian one of my favorite words is “earthquake”-землетрясение. In Uzbek, it is “snowman”-qorbobo or “gossip”-mishmish. In Kazakh, it is also the word for “earthquake”- зiлзала.