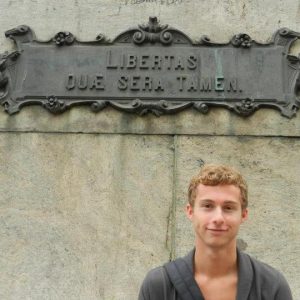 "A strong command of Spanish and Portuguese has also set me apart professionally in a job market where international experience and expertise are increasingly sought-after attributes."

Since graduation in 2013, I stayed in Madison for about 9 months, splitting my time between two positions at the university: outreach assistant at LACIS and assistant to the director of the Brazil Initiative. These two positions allowed me to put my regional and linguistic knowledge to good use while providing me with valuable professional experiences while I job searched and waited for the spring of 2014 when I traveled to Brazil. For three months, I interned with the City Hall of Belo Horizonte, a 2014 World Cup host-city. I worked with the communications team as a press officer receiving foreign journalists, guiding them around the city, facilitating their interviews and video production. While I was abroad, I accepted a position as a Spanish and Portuguese-speaking International Marketing Associate at The Advisory Board Company in D.C. “ABC” is a best practice research think tank that works with hospitals and institutions of higher education (including UW-Madison and UW Hospital) to help industry leaders make decisions on their most pressing challenges. I work on the Latin American marketing team and am responsible for coordinating sales meetings with C-suite hospital executives.

Initially, my motivation to study Spanish stemmed from the fact that it was always my best and favorite subject in high school. It quickly became apparent to myself and others that I had a gift, or at least a knack, for language study and it was something I wanted to fully dedicate myself to. My Portuguese-studying neighbors at the International Learning Community where I lived during my freshman and sophomore years served as the inspiration for me to try an intro Portuguese class and the rest was history as they say. I declared the Spanish/Portuguese double major (and then LACIS made it triple) and never looked back!

Knowing Spanish and Portuguese allows me to confidently communicate with and travel to an entire hemisphere, plus a smattering of countries throughout the world. Through language study, I have been lucky enough to travel, live and study in-region and forge strong friendships. A strong command of Spanish and Portuguese has also set me apart professionally in a job market where international experience and expertise are increasingly sought-after attributes.

UW language classes felt like home. Due to the communicative nature of language classes, I found that students and professors bonded faster and in general more. My language professors at UW became my academic mentors and I still keep in touch with a number of them.

Living in the International Learning Community’s Residencia de estudiantes, studying abroad, interning and volunteering were all ways in which I made language study a daily and near-constant activity. For me, language learning was definitely not something limited to the classroom.

I have improved my language skills since graduation through my personal and professional interactions and through the mass consumption of media in those languages: music, news, TV, films, etc.

If you’re serious about learning a language for life, live, eat, breathe, and sleep it! Don’t expect your hours in the classroom, as valuable as they are, to suffice.