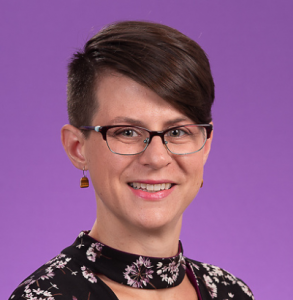 "Who says pursuing a degree in Art History and German wasn’t worthwhile? There is something to be said about studying what you find interesting."

I currently work as an Associate Professor at East Carolina University. My functional title is Head of Research and Instructional Services, Joyner Library. I am the liaison librarian to the Department of Foreign Languages and Literatures, where I support the German, French, Spanish, and Russian departments, as well as Global Studies initiatives on campus. I am currently on the Fulbright Specialist roster for a tenure of 3 years and am working with a library in the Netherlands to try to get them to host me for a special project related to my research. I wrote a book last year called “Development of Creative Spaces in Academic Libraries: A Decision Maker’s Guide.” Prior to working at Joyner, I also was a TA at UW-Madison in MERIT Library and for the Library School. I worked for 5 years at Sony Media Software in Madison as the German and Dutch customer service and technical support representative in the Worldwide Sales and Support team. That job was really good for letting me try my hand at many different jobs at a business; for instance, I had experience working on the front line, but also processing large international orders, working in the training department on tutorial videos, conducting translation projects, and also bug testing for issues with the software when it was translated into other languages.

I lived in Germany for 4 years and went to high school on the Army base in Heidelberg, Germany. I learned German in a hodge-podge of ways, including taking a class in middle school, going to Berlitz (my dad’s company paid for this before we moved over), and just talking to my neighbors on the street. My German was never and has never been 100% perfect, but I was interested in the language and culture from having lived there. I have always wanted to get a Ph.D. (but have not gotten one yet). I thought about doing a Ph.D. in German and one of the things I was advised to do was study a second Germanic language.  I took Dutch at UW-Madison and just loved the classes.

Back about 20 years ago, I decided to major in German and Art History while I was an undergrad at UW-Madison. Lots of people were telling me, “major in something you find interesting,” and, “choose a career that you love, so you never work a day.” Those adages seemed silly, even with very little work experience in the real world under my belt. (My parents had a much more pragmatic expectation of my college years and really wanted me to be a pharmacist. I knew I wanted a Ph.D. someday, but in what?) I persisted because I loved those two subjects and I found the classes and professors engaging. Of course, I think I realized even then that they reminded me of living in Germany, and that deep interest served me well through my Master’s program. So, the first adage proved to be true. Did they prepare me for getting a job? If you had asked me that a few months after getting my degree, I would have said no. The big question about my majors then was, “what are you going to do with that?” (I did get a job related to my studies about a year after graduation, and after 5 years there, decided to pursue librarianship.)

Fast forward: Last week, in my role as a subject librarian for Foreign Languages, I helped a graduate student in Anthropology with a research consultation about her thesis topic (I won’t share the exact topic, but this is completely new research). The artifacts she is studying are from Turkey and are inscribed in the ancient Hittite language. She speaks Turkish well and can read some Hittite. Most of the prior research on these artworks
was conducted in German, which she was struggling with. The titles, abstracts, everything, are in German with no English version available. Today she came with the books I helped her to get via Interlibrary Loan last week. One of them was published in Heidelberg and had a lion in the crest inside the cover. I helped her find the four paragraphs she needed from the book and did a rough translation of the content. We were both talking a mile a minute—way too loud for a library, too. I am truly so excited for her. She’s doing her life’s work. I am doing mine.

Who says pursuing a degree in Art History and German wasn’t worthwhile? There is something to be said about studying what you find interesting. This may only be the second or third time in months that someone needed this level of expertise from me (another student asked me for help with Pennsylvania Dutch Philology a few weeks back), but it is so gratifying when these questions that take 100% come along. I truly love helping the students who find their way to me.

The best class I ever took at UW-Madison had 5 people in the class and it was taught by Jolanda Vanderwal Taylor. We read Dutch novels; all of the people in the class were women, and it was a fond memory for me. One of the reasons it was such a fond memory is because it was such a small class size, especially at Madison, where you get in some of
these big survey classes and feel like you don’t get to know the professors. Another class that I took that I remember fondly was Mark Louden’s Pennsylvania Dutch class. He was an awesome advisor for me. He was very giving of his time and was incredibly supportive.

Now that I work at a university, I realize that two experiences that I had really did “count” as study abroad. I spent a summer abroad in Berlin doing a Goethe Institut course and living in a homestay situation in 2000. I arranged and paid for this myself, so it was not for credit. This was very valuable to me, and I made friends there that I stayed in contact with. I also took part in the Nederlandse Taalunie in 2001. My advisor on this trip was Jolanda Vanderwal Taylor, who helped me apply (she had experience helping others) and even helped me get a small stipend to cover the costs. I met the best friend I have ever had at the Taalunie. We still talk every week to this day, sometimes in German or English, less frequently in Dutch. She’s from an area in former East Germany but lives now in Ireland. The Taalunie helped me meet others and to improve my Dutch. I got to see inside some very neat museums and tour the parliamentary buildings in the Hague.

I have a weekly squatch with my good friend, who also studied German, and who is the Deputy Chief of Police for the East Carolina University police department. I also use the Deutsche Welle app and read things in German.

Pick a double major that compliments your language major. If you’re interested in being a professor, consider alternative academic jobs that require a Master’s degree, like librarianship, student affairs, or other support jobs. You end up getting to be with the students but you don’t have to grade papers! Another big tip I’ll share is that you should be willing to move. I wanted to stay in Madison, but of course, I did not end up staying in the area. I expanded my job search first to include Chicago, then to Colorado, and then to the entire US, and I am glad I did. Think of alternative ways to go on study abroad. Do internships and things like that. One of my biggest hurdles is that I had never worked in an office setting before, only restaurants and retail settings.