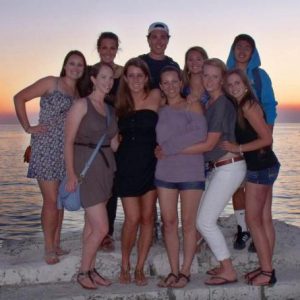 "When I was there, the locals loved if you even attempted to say a few words in their language. I thought it would be wonderful to know more when I go back someday."

Since graduation, I’ve been promoted from a student worker at Wisconsin Football to their full-time graphic designer. I now handle the branding of the football program as well as any materials that may get sent to football recruits or that fans would encounter on game days.

I studied abroad in Rovinj, Croatia the summer after my freshman year of college. I loved the country, the people, and the atmosphere so much that I chose to study the language in the hopes of going back. Additionally, when I was there, the locals loved if you even attempted to say a few words in their language. I thought it would be wonderful to know more when I go back someday.

I have always had a fascination with languages, but never had much of an opportunity to study them, as I am originally from a very small town. Studying Serbo-Croatian has given me a greater appreciation of the culture and the beauty within all languages. It’s also allowed me to learn to write in more ways as there are two alphabets – the traditional Latin, as well as Cyrillic, in both cursive and printing.

They were very, very hands-on. I became really close with the other students and was always able to have help with whatever I needed. Dijana was such a great instructor as well – she genuinely wanted us to learn the language for us, not just because we were in the class. It also exposed me to the culture, as we would often have traditional baked goods and other food as part of the class.

I cannot express how much my study abroad experience in Rovinj, Croatia means to me. I light up any time that I talk about it or look at pictures. It inspired me to take the language and was my first experience outside of the United States. There’s so much that I gained from it – from knowledge to confidence, that I don’t think I could possibly sum it up in a few sentences.

Definitely, spend at least a few minutes with the language every single day. It’s difficult with all the other classes and demands sometimes, but it’s so worth it. It would have been a lot easier for me had I devoted that time to it.

Živeli! (used as the equivalent of “Cheers”)