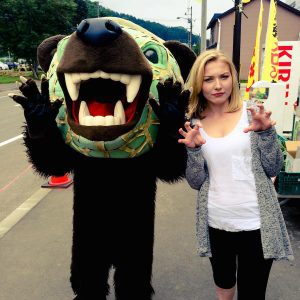 "My language classes were always so much fun. Although I dreaded assignments and class time for some of my classes, I never felt that way towards my language classes. Participation was never a chore, and class was usually interactive, which made the time so much more interesting."

During the summer, I worked for a program called Student Diplomacy Corps and led a group of American high schoolers around Japan for a month. After I moved to Chiba, Japan to begin my English teaching job.

I have always really enjoyed Japanese culture, so when I got to Madison and saw they offered Japanese classes, I decided to begin learning it. I liked it so much I decided to change my major to Japanese.

I studied Spanish at UW-Madison because, although I had been fluent as a child, I had forgotten most of what I knew and wanted to improve my Spanish language skills before I forgot what I had learned.

I decided to study Vietnamese because I had just visited my boyfriend’s family in Vietnam, and was unable to speak to anyone or do anything for myself. It was frustrating to have to be taken everywhere on top of not being able to communicate with people very important to my boyfriend.

When I travel to Japan (and now that I live here), being able to speak the language makes everything easier and opens so many more doors for relationships. I don’t have to struggle to do everyday activities and I’m able to act as a guide for my family, and even for high schoolers like I was able to do this summer.

I also love traveling and knowing Spanish opens up so many countries and American subcultures to me.

My language classes were always so much fun. Although I dreaded assignments and class time for some of my classes, I never felt that way towards my language classes. Participation was never a chore, and class was usually interactive, which made the time so much more interesting.

I was able to put my language skills to the test (and learned I needed much more practice), and was also able to solidify my goals of living and working in Japan in the future. It’s one thing to learn about language and culture in the classroom, but it’s so much more impactful to live somewhere for a year and see if your preconceived ideas about the country were accurate and which ones were not.

I acted as a guide for American high schoolers and was required to translate and interpret a lot. I’ll also be living in Japan for the next two years.

Study through alternative methods (along with your homework), like movies, magazines, and TV shows. They’ll really put your language skills to the test of everyday language in a way that classwork and homework can’t.