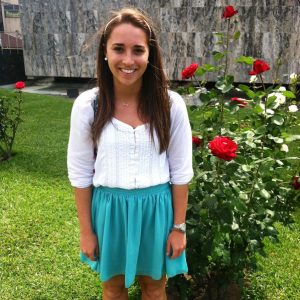 "I began studying Spanish because I simply needed it as a requirement to graduate, but it evolved into so much more than that. Once I started taking Spanish classes, I realized I was excelling and enjoying them too, which don't always go hand in hand. It seemed like a very logical step for me to add Spanish as a second major because it fit well in my schedule, and I truly didn't want to stop taking the classes!"

Since graduating from UW-Madison, I’ve started working full time for RockAuto, a company on the west side of Madison that sells aftermarket car parts to people all around the world.

I began studying Spanish because I simply needed it as a requirement to graduate, but it evolved into so much more than that. Once I started taking Spanish classes, I realized I was excelling and enjoying them too, which don’t always go hand in hand. It seemed like a very logical step for me to add Spanish as a second major because it fit well in my schedule, and I truly didn’t want to stop taking the classes!

It’s a wonderful feeling to be able to hurdle the language barrier and communicate with people whom I would not be able to speak to without my second language. I also travel more confidently; I’d like to think I hold a greater respect for the different cultures one experiences when traveling since I learned about many of them in my classes.

Students in Spanish classes always seemed more connected than those in my other classes. I think that stems from the nature of how class operates – since no English is spoken at all, it requires much more effort and concentration than any other class I’ve taken at UW. I think there is something to be said for how a student studying a language has to step completely out of their comfort zone at times when participating in class.

There’s truly no way I could assign a value to the experiences I’ve gained since beginning to learn Spanish. Traveling to Costa Rica changed me in so many incredible ways, and I grew as a person as I found myself navigating in such a different culture and environment. I also held an internship as a Facilitator in a family wellness group of Spanish-speaking mothers in the Madison community, which improved my skills tremendously. Lately I find that true enjoyment and satisfaction come from the simple things, such as reading cognates and not needing to break out the dictionary, taking satisfaction out of understanding the Latin roots of romance languages, asking local natives for directions (and actually understanding them!), giving my order at a restaurant in Spanish, or rereading my favorite book in my second language (I’m currently on Harry Potter y la Cámara Secreta). Spanish has no doubt enriched my life, but on top of that, it’s also made me a much more desirable job applicant.

Working at RockAuto has been instrumental in the improvement of my Spanish-speaking abilities since graduation. I’m no longer in Spanish classes anymore, so at first I worried I would lose my ability; fortunately, there’s no chance of that because on a daily basis I talk to customers in Spain, Mexico, Argentina, Ecuador, Cuba, Costa Rica, Puerto Rico… I’ve gotten to practice my Spanish for almost every Spanish-speaking country and its particular dialect, which isn’t something most job opportunities in Madison (or elsewhere) can offer.

If you looking for an opportunity to use your Spanish skills every day – while you’re in school (and after graduation), it is totally possible when living in Madison. I started at RockAuto during my junior year in Spanish/Psychology at UW and have been working here and improving my Spanish skills ever since. Because RockAuto is a global company, there is also a need for people who speak French, German, Russian, Chinese… you name the language; it will definitely be a help in securing a job (at RockAuto and elsewhere!).