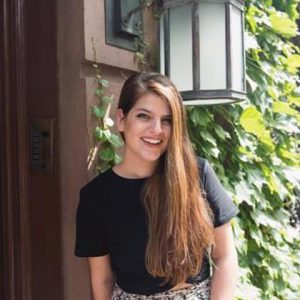 "I'm so glad I majored in French. The classes were great and I love being bilingual. If you can, take more than one language."

Currently, I’m interning at BuzzFeed! I’ve also been the graphic designer and social media coordinator for The Nitty Gritty.

My last name is a very popular French first name, so I decided to take French when I was 12. I continued it throughout college!

It’s amazing to know not only about French culture, but about other Francophone countries. Two of my favorite French classes were the history ones! I looooove history and French history was amazing to learn about in French.

The classes were smaller and they were super interactive! I actually enjoyed going to French class.

Studying abroad was the best part of college! I loved being able to live in Paris and explore while using my French. My senior year, I was actually the intern at The Language Institute, so it was fun to learn a lot more about other languages and get students excited about learning languages.

I’ve lost a bit of it, but at BuzzFeed/in NYC, I’ve gotten to hear French so much more often! I’ve even got to respond to emails in French, so that’s been exciting. I try to do easy things to keep up with my French- like listening to Disney songs in French at work or watching movies in French.

KEEP GOING! If you can major or minor it, go for it!!! I’m so glad I majored in French. The classes were great and I love being bilingual. If you can, take more than one language. I now live in one of the most highly populated Spanish-speaking neighborhoods in the US, and I wish I knew Spanish!