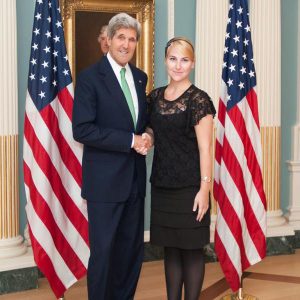 "On a personal level, studying different languages has given me a completely different insight as to how to relate to the rest of the world. They have made me more outgoing and eager to connect with people. They have made me less afraid to make mistakes (you get used to making mistakes when trying to speak a new language) and have connected me with an entirely new network of amazing people."

Since graduating in December of 2013, I moved to Washington, D.C. to be a fellow with a non-profit organization dedicated to governmental reform, The Partnership for Public Service. Soon after, I found a job with a government consulting firm, specializing in logistics and acquisition management.

I had started studying Spanish in high school, so it was a natural progression to study in college. I also did a Rotary-sponsored exchange in high school to Finland. I fell in love with the people and the culture. When Finnish wasn’t offered my first year of college, I decided to take the other state language of Finland: Swedish. Then, I fell in love with Sweden too! Thankfully, Finnish was offered my second year of university and I was able to learn more about the fascinating cultures of Scandinavia.

On a personal level, studying different languages has given me a completely different insight as to how to relate to the rest of the world. They have made me more outgoing and eager to connect with people. They have made me less afraid to make mistakes (you get used to making mistakes when trying to speak a new language) and have connected me with an entirely new network of amazing people. Without studying the languages, our paths never would have crossed. Professionally, studying languages have shown my potential employers my dedication to learning and my cognitive abilities. Finnish and Swedish aren’t very common languages here in the U.S., and they definitely stand out on a resume and make you a memorable candidate.

UW classes are huge and full of people that you’ll most likely never meet. The language classes, however, are the complete opposite. They are intimate and small, and you have the ability to connect with your classmates and teachers on a much more personal level. When progressing to higher levels, you often stay with the same group you started with. You’ll end up going to classes for 4 years with some of the same people, leading to lifelong friendships. Plus, language classes are fun! You get to play games and watch foreign TV shows and eat new kinds of foods. How can you go wrong?

UW Madison did not offer a program to go to Finland, so I made one myself. I dropped out of UW, enrolled into the University of Helsinki, and studied there for a year. It was very difficult, but extremely rewarding. I want people to realize that you don’t have to be limited by what UW Madison offers; if there’s a country you want to go to, you can probably make it happen with a little bit of elbow grease and diligence.

I interned with the Department of State at the Foreign Service Institute (FSI). My language studies fit in perfectly with the overall environment and goals of FSI, and I was able to assist with many different projects. My main focus was training Ambassadors to go to different posts. Not only did I meet the next Ambassador to Norway, but I was able to speak Swedish with the former U.S. Ambassador to Sweden. I was also able to meet Secretary of State John Kerry during an Ambassadorial swearing-in ceremony.

Living in D.C., I try to go to all the cultural events. During the holidays, I attended both Swedish and Finnish Christmas markets. I am starting to formally study Finnish and Swedish again through online programs, as I am being recruited to work on a government contract with the Swedish government.

Study what you want to! When I told people I was studying Finnish and Swedish, almost everyone thought I should study something more ‘practical’, like Spanish or Mandarin. While those are great options too, you need to follow your heart and do what you’re passionate about. Even if you’re not 100% sure how that language will fit into your future, do it! You end up making your own future by choosing your desired language.