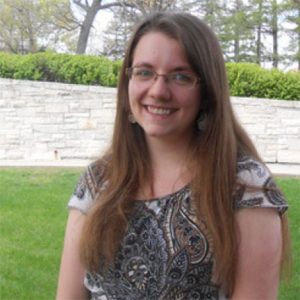 "My Chinese major completely shaped my undergraduate experience. I had the amazing opportunity to study abroad both in Mainland China and Taiwan. I grew a lot through both of these experiences, and they are among my proudest moments at UW."

I coordinate a service-learning travel program for UW students called Quest, with about eight trips a year to countries all around the world. The summer “orientation” for my job was incredibly interesting: I worked with a group of students at a National Park surrounded by oil fields in North Dakota, and I traveled with a different group of students to volunteer with the UN and learn about child immigration and violence in Honduras and at the US/Mexico border. I also work part-time as a tutor at Hamilton Middle School.

I enjoyed studying Spanish in high school, and I knew that it was something I wanted to continue to study as I came to college.

I had always been fascinated by non-Western languages, especially after my mom took a few trips to Asia for work when I was about 15. I was intrigued by the unique nature of the Chinese language, and I figured that Chinese and Spanish are among some of the most useful and widely-spoken languages in the world. I enjoyed the Chinese language, culture and the people I met learning the language so much that I ended up adding it as a second major!

Spanish is incredibly useful both in the USA and throughout the world. I’ve had coworkers and bosses who speak Spanish, I’ve used it to communicate while volunteering in Madison, and it helped me to communicate and connect as our Quest group traveled throughout Tegucigalpa and Tijuana in Honduras and Mexico.

As for Chinese, my Chinese major completely shaped my undergraduate experience. I had the amazing opportunity to study abroad both in Mainland China and Taiwan, in an intensive language program at Nankai University in Tianjin, and as an exchange student in the Political Science Department of National Taiwan University in Taipei. I grew a lot through both of these experiences, and they are among my proudest moments at UW. Through learning Chinese, I made amazing friends with my classmates at UW and while studying abroad, with a number of Chinese students at UW, and with my coworkers at the Concordia Language Villages Chinese program that I worked at for two years.

The first year Chinese program is intensive—classes meet for five discussions and two power lectures every week. Our class had the best TAs, and our discussion became like a little family because we met together so often.

I can’t emphasize the value of my study abroad experiences enough. Especially in regards to my exchange experience, I arrived at National Taiwan University as the only student from the American Midwest, and I worked hard to establish myself and succeed by exploring the city, studying diligently for my Chinese classes, actively participating in clubs, and making local and international friends who I’m still very, very close with today. I look back on Tianjin and Taipei not just as a place I’ve traveled to, but as a place where I’ve learned and grown, and a place that is now a part of me.

Since graduation, I received the news that I passed HSK 6, the Chinese fluency exam, and I continue to practice by frequenting Chinese and Taiwanese pop culture online, keeping up with friends, and leading a small Chinese language group at The Crossing, where I work.

Spanish has been integral with my work with Quest at The Crossing so far—my boss is fluent in Spanish, I supervised a summer intern through Centro Hispano, I’ve traveled with the program to Mexico and Honduras, and I’m leading trips to Costa Rica and Cuba, as well as planning a trip to Nicaragua.

Engage both in and out of class! Don’t just study for exams—see exams as aids in helping you obtain the ultimate goal: fluency. In your free time, seek out every opportunity you can to learn more about your language and the culture where it is spoken, whether it is a language table on campus, holding a foreign language movie night, meeting with an international student, or studying abroad.