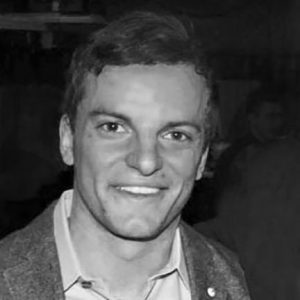 "It's an amazing feeling to adapt to a culture halfway across the world and experience life as a local. I've been shown hidden castles in the Alps, secret clubs in Berlin, and met some of the most extraordinary people in my life. Plus, as an American, no one expects you to speak another language so it can be a neat party trick."

Upon graduation, I had a job offer for a German-speaking finance position fizzle out. I returned to my hometown, and in somewhat of a panic, I started my own small business. I knew I wanted to work in international sales, but I needed to prove myself and learn the fundamentals. I grew my client base for Keys Marketing and also worked in advertising for a company between NYC and Colorado. After just under two years, I applied to my current position in the Netherlands. I now head up European Business Development for a global creative production company called MediaMonks. It’s my job to meet with major brands and advertising agencies all over Europe with the intention of creating innovative and effective advertising campaigns. It’s a pretty incredible position where I work on the forefront of new creative technologies (like virtual reality) on an international level. I speak three languages every day and fly to a new city every other week. Never a dull moment!

I came to UW-Madison having spent an exchange year in Switzerland and speaking two dialects of German. My goal was actually to study Czech, but long story short, funding was cut and my coursework came to a halt after year one. I still wanted to study abroad in college (and be able to speak the language) so I thought I’d give Dutch a whirl. It’s very similar to German, but the grammar is simpler, and I found it pretty easy to pick up. I studied abroad in the Utrecht, NL and had a blast. I worked in the student bar, volunteered at an elementary school, and drank far too much Grolsch for one lifetime. The other languages I studied were really just to indulge my passion for the intricacies of grammar and historical linguistics. It culminated in my bachelor’s Honors thesis, where I analyzed and compared several dialects on the Germanic language spectrum. My coursework gave me the historical background I needed to speak about dialects in a more developed way.

In almost every imaginable way. It’s an amazing feeling to adapt to a culture halfway across the world and experience life as a local. I’ve been shown hidden castles in the Alps, secret clubs in Berlin, and met some of the most extraordinary people in my life. Plus, as an American, no one expects you to speak another language so it can be a neat party trick.

Firstly, they were a whole lot more fun! It’s easy to enjoy yourself when your time is spent interacting and joking with the people around you. Beyond that, it’s the only subject where the best homework is grabbing a few drinks at the bar and striking up a conversation. Ya can’t do that with calculus! What I’ve always found most interesting about languages though, is how immediately applicable they are. I always struggled with math in high school because I never saw the use for it. Languages were always different because it’s a skill you can directly put to work, and often in a fun environment.

Studying abroad and making a genuine effort to speak the language and adapt has been one of the most fulfilling experiences in my life. So fulfilling, I moved across the Atlantic to do it full-time! It’s an experience that taught me a lot about the world, but even more about myself. I’ve learned to question my thinking in a different way, and I have a completely different perspective on where I grew up than I ever could have if I’d only stayed in the US.

Maintaining language ability while working full-time is an extremely difficult task. The good news is, even if you’re out of practice, the knowledge is still there. It just needs to be exercised. I often watched Netflix shows dubbed over in German (which was weird) and watched as much foreign news as possible. Most European countries make their daily news available online, which was tremendously helpful, and usually a little more informative than what we see on American networks.

Have fun with it! Study abroad and don’t just hang out with Americans. If the opportunity presents itself, stay somewhere for a full year. Those extra few months will force you to learn exponentially more. Languages can be hard, living abroad can be hard, but the feeling of mastering a language and/or culture is satisfying on an almost indescribable level.

Dutch: Mierenneuker // English: Nit-picker // Literally: One who has sex with ants