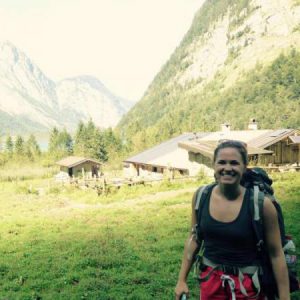 "Being able to speak with someone in their native language is an invaluable way to establish a personal and trusting connection."

I spent the summer after graduation volunteering on the island of Mauritius. As an undergrad, I was a member of AIESEC, promoting and recruiting international exchange on campus. After graduating, it was finally my time to partake in an AIESEC exchange. I spent half of my summer helping a local woman jump-start her vision for a food delivery business (and enjoying a paradisiacal tropical island, too!). Since September, I’ve been teaching English near Leipzig, Germany as a Fulbright English Teaching Assistant. On the side, I’ve become involved in Germany’s refugee “crisis.” I volunteer at shelters, teach German, and mentor/tutor a young Syrian who’s integrating into the German school system. It’s definitely been a busy year!

My family lived in Bavaria, Germany from 1998-2001, so I first learned German when I was five years old. Much of the language and especially the grammar I had lost over the years once we moved back to Wisconsin. It wasn’t until I had the opportunity to take college-level German through Youth Options in high school that I realized I could truly get better again. I realized that language was my ticket to holding on to this second home across the Atlantic, and I wasn’t going to be satisfied until I got to my destination — complete fluency. German at UW pushed my spoken and written German to its limits. Studying German also presented me with the opportunity to study abroad for a full year in Freiburg, Germany…hands down one of the best study abroad programs I’ve ever heard of, and a highlight of my undergraduate career!

People often ask me, “Why learn German? Don’t they all speak perfect English over there anyway?” But learning German has definitely not been a waste of time. Germany is a relevant and powerful country and has acted as the de facto head of Europe in handling both the Euro and refugee crises. It’s the regular +1 member at P5 UN Security Council meetings. Speaking German and understanding the culture has opened so many doors: from internships to Fulbright, to personal relationships. Being able to speak with someone in their native language is an invaluable way to establish a personal and trusting connection. I’ve been dating a German for four years and have made unforgettable experiences with my him, his family and our friends that wouldn’t have been possible in English.

Language classes were always fun because more so than in other subjects, I could watch progress happen before my eyes. I took one semester of Italian (more didn’t fit into my schedule after that, unfortunately), and progressed from being able to say no more than a few words to speaking for several minutes at a time! My last semester in German was also a unique highlight. It was a theater class in which we worked with a German director and put on a piece entirely in German. That fun, dynamic, creative experience finds no parallels in my other courses’ curriculum.

Interning with German companies and research institutes, being involved on campus with AIESEC and especially studying abroad in Freiburg for a full 12 months helped round out my academic experience as a Badger. Not only was I studying International Studies and German, but I was also living it. I could make more meaningful connections with students who share similar interests than is possible in the classroom. I could build an international network both professionally and socially. And while in Germany, I could travel around Europe!

Progressing with my German is a regular and daily part of my life. I’m always trying to absorb new words into my vocabulary and shamelessly ask my German colleagues, friends and roommates how to best say something — even if I’m in the middle of a sentence. I love incorporating German so regularly into my everyday because it keeps my brain sharp. As they say, there’s always something to learn, and this aphorism most certainly applies to foreign/second languages. On another note, I’ve been learning Spanish! With the help of a class here in Germany and the Duolingo language app, I’ve slowly moved beyond “Hola, comó estas?” Starting from scratch at 22 is undoubtedly more difficult than it was at age five, and taking Spanish class in German only makes things more complicated. It’s still been a fun challenge!

Find a significant other in your target language. (Seriously. Of course only if you’re compatible with each other!) If that’s not possible, however, then there are other options! Get abroad, and while there don’t just spend your time with other Americans. Persistence is also important. Stick with the language and practice every single day. Become interested in the culture or you may easily lose motivation to continue with the language. Don’t let mistakes hold you back. Speaking is the best way to improve proficiency — by far!

“Vokuhila,” which means mullet (as in the haircut). It’s an abbreviation for “vorne kurz hinten lang,” which means “front short back long.” Germans just like saying it as it is, I suppose!