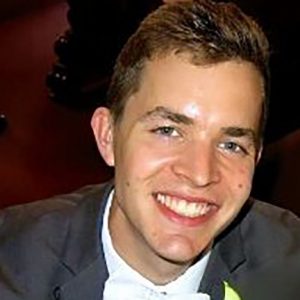 "My study of Korean has enriched my life in a variety of ways. It has given me the opportunity to travel, study, and work in a foreign country, and has allowed me to experience the Korean culture in a way that would not be possible otherwise. I have also met many of my closest friends through the course of my studies."

Following graduation, I moved to South Korea where I worked as an English teacher at a middle school outside of Seoul. After working for one year, I left to pursue a full-time Korean language study at Sogang University Korean Language Education Center, where I studied for 9 months. I then returned to the US in spring, 2013, got married in the State Capitol building in Madison and then moved to NYC to start a one year East Asian Regional Studies master’s program (MARSEA) at Columbia University, completing my degree in May, 2014. During my time there, I was also awarded the US State Department’s Critical Language Scholarship for Korean, bringing me back to Korea to study Korean at Yonsei University Wonju campus last summer. I am now working as an assistant professor of English at Cyber Hankuk University of Foreign Studies in Seoul while continuing my Korean studies.

With an interest in Korean history, I participated in a study abroad program at Seoul’s Ewha Woman’s University in the summer of 2009, which sparked my interest in continuing my Korean language study after I returned to UW and moving back to Korea after graduation.

My study of Korean has enriched my life in a variety of ways. It has given me the opportunity to travel, study, and work in a foreign country, and has allowed me to experience the Korean culture in a way that would not be possible otherwise. I have also met many of my closest friends through the course of my studies.

Professor Lim made Korean language classes both interesting and fun, which are critical to the language learning process. I always enjoyed learning new expressions and using them with language partners on campus and through an online language exchange that Professor Lim set up with a Korean university. I actually ended up meeting my virtual language partner when I moved to Korea in 2011!

Study abroad was great for gaining exposure to the Korean language and culture. It was great to experience student life in another country, and the students at Ewha were so great in introducing us to Korean food and Seoul in general. Realizing how many exchange students at Madison might be looking for a similar experience, I participated in UW’s BRIDGE organization and met with a Chinese student for a semester, showing him various sides of Madison that may have been difficult for him to experience otherwise. I also worked at and participated in language exchanges at GUTS.

I have studied the language continuously since graduation, taking formal classes, participating in language exchanges, and studying on my own.

Languages take years of practice to learn (especially East Asian languages), but the rewards are well worth the struggle.