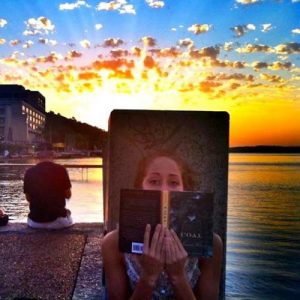 "I was astounded that my TA was so accepting of my novice skills. Throughout my 5 semesters of UW French education, my language and culture skills have been fostered to a point that I feel extremely confident in who I am as a francophone person."

Although my bilingual mother never taught me her native language, the Latvian phrases, songs, stories, and prayers that she succeeded in passing down always captivated me. It may be due to these teachings that from a very young age, I knew language and culture would be my primary studies in coming decades. When I came to UW, I was very torn about which languages to keep studying. When I talked to the language advisers at SOAR, they encouraged me to trust in and follow my passions. I was able to continue studying Spanish, French, and Japanese, and passed each class with flying colors, because of the engaging and encouraging TAs, professors, and materials.

Studying language at UW-Madison has weaved its way through many facets of my life, always enriching and always improving me. In my personal life, I’ve enjoyed feeling my language skills developing. I often think or even dream in another language. I am able and confident to communicate with people from many different countries. My perspective has broadened immensely, even from inside the classroom. I know I can always look forward to studying for my foreign language, culture, and history classes. I also have been able to speak other languages during interviews and on the job, both as a form of vital communication and as a form of enjoyment and socialization. I hope to use my languages and the confidence the UW has given me in my future career (in diplomacy or international law, perhaps?).

At UW, at first, I was very nervous about taking a college-level French course. However, this anxiety quickly dissipated in my first French course. I was astounded that my TA was so accepting of my novice skills. Throughout my 5 semesters of UW French education, my language and culture skills have been fostered to a point that I feel extremely confident in who I am as a francophone person. Spanish has thus far afforded me opportunities to teach English as a second language (to middle and high schoolers, and through the Literacy Network), to join various clubs/Spanish-speaking activities, and to delve into Spanish-American history and culture much more profoundly.

Guatemala and Honduras: In high school, I did a three-week home-stay in Guatemala with a side-excursion to Honduras. This was the first time I traveled out of the country on my own, and the first time I stayed with a family I had never met before. This experience was eye-opening in many ways. Costa Rica: In high school, I did another Central American home-stay. This time, I knew many people I was traveling with, and I was also allowed to attend school with my host sister. Argentina and Uruguay: In high school, I did one final Latin American homestay, traveling further yet. In Argentina, it became clear that the skills I was building were tangible and extremely valuable.