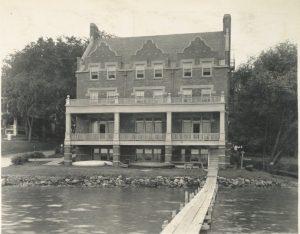 The French House has several events planned this fall for the celebration of its 100th year on campus.

The French House, a French immersion residence hall on campus, was created in 1918 by Professor H.A. Smith and Mme Jeanne Harouel Greenleaf. Originally an old fraternity home, it was made over and refreshed to house 21 students in its first year open.

In the next 60 years it would overcome adversity in the form of economic depressions, wars, repairs, and social change. It would change locations twice, moving to University Ave and then back to its original location. Nevertheless, it continued to persist, housing over 2000 students since its creation, allowing students of all majors to explore their love of French.

Non-student French lovers from around the greater Madison area and the state of Wisconsin are welcomed year-round as well at various dinners and cultural celebrations, making the French House more than a house, but rather an institution on campus.

During the University of Wisconsin-Madison’s Homecoming Weekend 2018, October 19th-20th, the House is hosting three major events, a Brunch tailgate, a gala, and a keynote speaker.

The first event of the weekend is a talk by historian Judith Siers-Poisson. She will discuss the journey of the French House and its changing locations as well as the history of the three houses it has resided in. The talk is open to the public and will be in English. The talk begins at 11 a.m. on Friday, October 19th with a lunch offered at 12:15 pm, reservations and payment for the lunch are required.

The next event of the weekend is the Centennial Gala. The Gala includes a cocktail hour, dinner, and live music. The event is centered around a look at the past of the house and their direction for the future. The dinner takes place at 6 p.m. on Friday, October 19th and requires registration and payment.

The last event is a tailgate for the Badger Football Homecoming game, featuring French cuisine prepared by guest chef Betsy Piper including champagne cocktails, pastries, cheese and salami boards, and fresh fruit. The tailgate begins at 9 a.m. on October 20th at the French House and requires registration and payment.

Events are welcome to French lovers and alumni, as well as current students. The French House is also seeking donations to ensure its existence for another centennial. Donations can be made on their website.

For more information on the French House or their events visit the House’s website at http://uwfrenchhouse.org/.